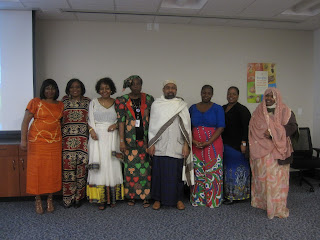 We are celebrating Black History Month throughout the country. Last week we had a small celebration in the office. Since we have black people from different parts of the world working in the office, this was a very nice and interesting exposition of cultures, music and food.These are some of the things I learned from my coworkers who came from the Virgin Islands, Somalia, Ethiopia and also my African-American coworkers. I'll share some interesting facts about each one of their cultures.Virgin IslandsThe population in the United States Virgin Islands (USVI) is largely made up of Caribbean people whose ancestors were Africans and Europeans. People from the Virgin Islands are called Virgin Islanders and based on the island of residence are called St. Thomian, St. Johnian, Crucian and Water Islanders respectively.

Some of the food eaten in the USVI is based on African sources.  Seamoss is a popular drink made of seaweed that is boiled until it dissolves and then is mixed with milk and spices. Killaloo is a stew made with local greens and fish and includes okra.
Source: USVI 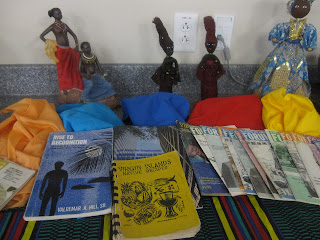 We enjoyed samplers of Caribbean flavors and a nice exposition of books and artifacts.SomaliaThe name Somali originally came from the two Somali words of SOO and MAAL that means, “Go and milk it”. That shows that the Somali people were rural and herders, who move from place-to-place seeking good grazing lands.The Somali customs and traditions are similar to those from Arab and other Islamic cultures, as far as marriage, clothing, family and food. But there are still some local traditions which Somali people practice once a year in certain parts of their country - DABSHID ( fire burning): it is an annual festival in Lower Shabelle region, which the local people burn a big fire and dance around it. 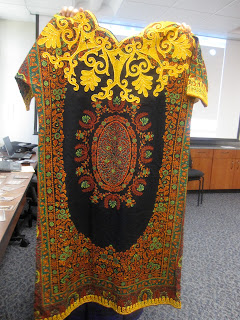 Women usually wear one of the following dresses:
Direh, a long, billowing dress worn over petticoats.
Coantino, a four-yard cloth tied over the shoulder and draped around the waist.
Toob, commonly worn throughout Africa.
Hijab, and head scarfs are very common.
Source: The Customs of Somalia 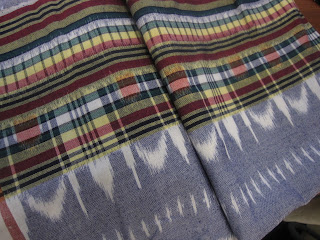 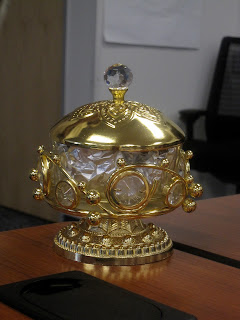 Omar shared with us different pieces of traditional clothing men and women wear. He brought a couple of urns in which women burn incense to perfume themselves in preparation for intimate relations with their husbands.Ethiopia 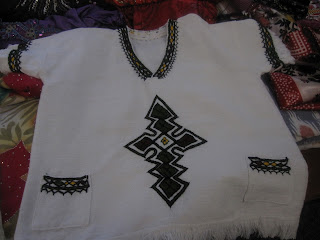 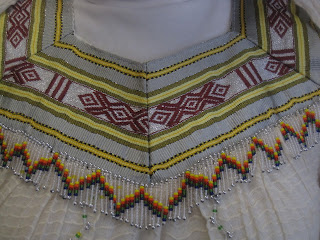 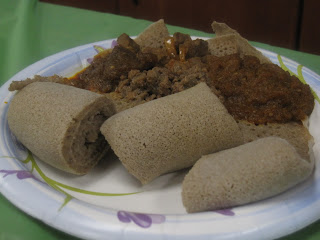 The Ethiopian national dish is called wat. It is a hot spicy stew accompanied by injera (traditional large spongy pancake made of teff flour and water). Teff is unique to the country and is grown on the Ethiopian highlands. Helen shared with us this traditional food, which I really enjoyed. The bread is delicate with a very unique flavor and texture.                   Source: Ethiopian Treasures
African-American 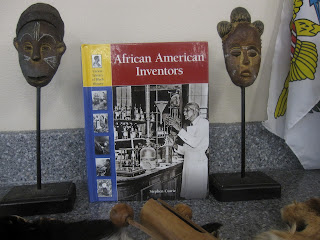 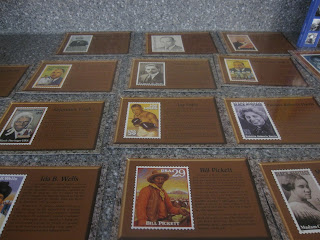 America is rich in black history and has many reasons to celebrate Black History Month. Dr. Martin Luther King's birthday is probably one of the most celebrated holidays among African-Americans. However, there is another celebration that has been taking an important place among African-American citizens  and one that I found very inspiring - Kwanzaa.Kwanzaa (Quansa) is a holiday celebrated by many African-Americans. It is held December 26th through January 1st. It was started in 1966 by Doctor Maulana Karenga, Professor at California State University, Long Beach, California.The name Kwanzaa is derived from the phrase "matunda ya kwanza" which means "first fruits" in Swahili. Each family celebrates Kwanzaa in its own way, but celebrations often include songs and dances, African drums, storytelling, poetry reading, and a large traditional meal. Kwanzaa also has seven basic principles which represent values and concepts reflective of African culture.

Seven principles of Kwanzaa:
Umoja (unity) to strive for and maintain unity in the family, community, nation and race.
Kujichagulia (self-determination) to define ourselves, name ourselves, create for ourselves and speak for ourselves.
Ujima (collective work and responsibility) to build and maintain our community together and make our sister's and brother's problems our problems and to solve them together.
Ujamaa (cooperative economics) to build and maintain our own stores, shops, and other businesses together.
Nia (purpose) to make our collective vocation the building of our community to restore our people to their traditional greatness.
Kuumba (creativity) to do as much as we can to leave our community more beautiful and beneficial than we inherited it.
Imani (faith) to believe with our hearts in our people, our parents, our teachers, our leaders and the righteousness and victory of our struggle.
Source: Kwanzaa 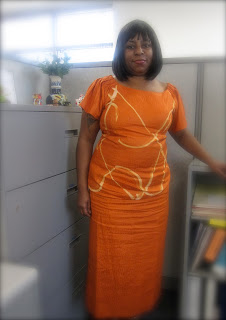 Kim was one of the representatives of the African-American community in our office and she is wearing a beautiful attire. 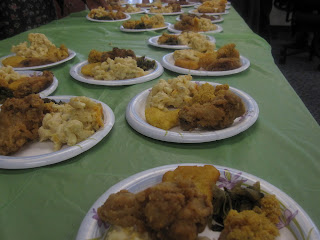 Overall, we had a beautiful celebration for Black History Month in which I learned a lot and enjoyed a great sampling of wonderful food and artifacts from each region. 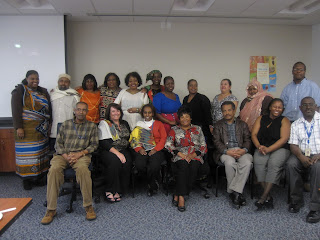 Many thanks to my coworkers for taking the time to organize this event and sharing with the rest of us their cultures and traditions.

I found a new friend at the market. He is one that comes to the market every year but, although I was curious, I never had the courage to approach him. Well, this week I did.


I discovered that he is one of those friends that are full of charm and can captivate your attention in a matter of minutes. He has an interesting and rare face, but he's definitely very handsome.  He is unique, vibrant and sweet; all I want to do is bring him home one and a million times.


I'm talking about Romanesco. My new friend is technically a broccoli but resembles and tastes more like a cauliflower. You may have seen it at farmer's markets and grocery stores. It looks almost like something you would see in the bottom of the ocean; like a coral. It is a beautiful green cauliflower-like vegetable, the flavor of which, when roasted, becomes sweet and nutty and just delicious! 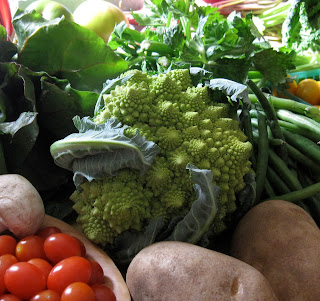 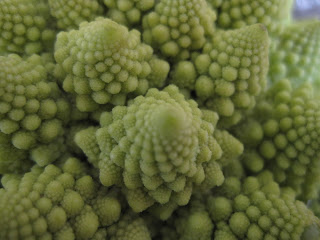 I prepared Romanesco for dinner last night and almost ate the whole thing by myself. I wanted to eat it all but my husband also liked it, so I had to, reluctantly, share with him. My preparation was a simple and easy one - roasted in the oven with a few added ingredients. Here is the recipe:


1 head of Romanesco broccoli, broken up into florets (any kind of cauliflower would work)
1 cup diced butternut squash, optional (I had this in the fridge so I used it).
6 garlic cloves, pealed
4 tablespoon olive oil
1/2 teaspoon kosher salt
1/4 teaspoon freshly ground black pepper


Preheat the oven to 400°F. On a large baking sheet, toss all ingredients together. Spread on a single layer and bake for 30-40 minutes or until vegetables have softened and are brown in places.
Remove from oven and serve hot. 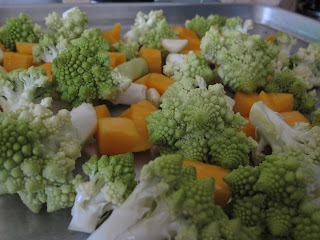 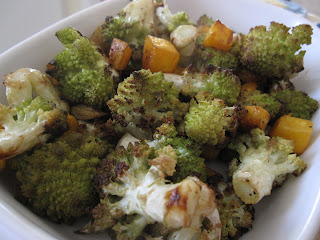 I served this to accompany rice topped with a mushroom sauce, which I thought would be the main dish. It turned out that I liked the Romanesco more than anything else on my plate. 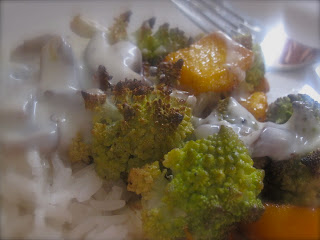 Like a charming new friend, Romanesco won me over. 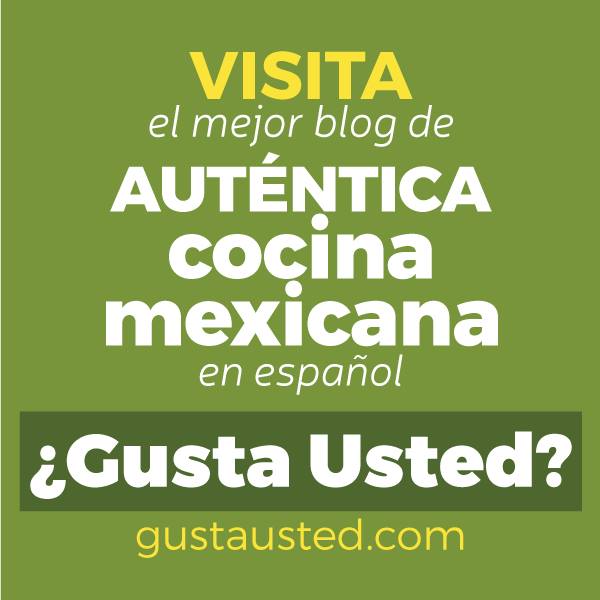